EXbunker used to be a bunker during World War II. Since 2014 four artist transformed it into an art space.

On the edge of the leafy Wilhelminapark is EXbunker, an old command bunker from the World War II. The concrete colossus was built in 1943 and could accommodate six people. A special monument that was hidden between bushes for years, was overgrown with ivy plants, and served as a storage place for cables, tools and old mopeds.

Until 2014, when four Utrecht artists were concerned about the fate of the abandoned bunker. They transformed the hiding place into an exhibition space. A space for expression that fills each month with new, high-profile art. From installations to photos, poetry, sculptures, paintings, films and performances. 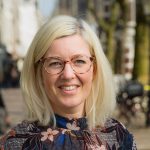